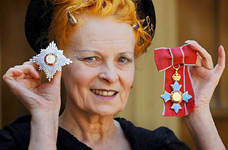 Could many of those receiving a gong from Queenie be receiving a reward for their work on behalf of social engineering?

When Mick Jagger got  a gong it proved to me the music industry isn’t what people are led to believe it is! In the 1960's who on earth could have imagined Jagger getting a gong and accepting it!

The youth culture of the 1960’s was, I believe, not free expression but a skilful piece of social engineering that was deliberately manipulated into the society we have today. Over the last forty years or so it is no coincidence mainstream music has become deliberately bland, fashions have become ugly and society is stressed out by constant economic pessimism. This is whilst the 1% that rule the world get richer!

Even Vivian Westwood, the woman who I believe put ugliness into fashion, received a gong. To me her designs look as if their origins are from the very sick minds of the Tavistock Centre. Creating impractical ugly fashions isn’t art, never has been, never will be!

I would not be surprised if in the near future Johnny Rotten gets a gong even though he made the record "God Save the Queen!" When punk reared its ugly head in the 1970’s I thought it seemed more to do with manipulation of the masses than music!  Again, I don’t believe it was anything to do with youth rebellion it was more to do with Tavistock Centre social engineering.

What the establishment does and what it is supposed to represent is rarely what it seems. As said in previous articles, psychopaths always preach the opposite to what they do; the royal family and politicians are typical examples.

There are a few genuine recipients of Royal gongs but I question many and the overall reason for the entire arse licking ceremony. It seems more to do with Royal public relations than anything else. It is yet one more piece in the false illusionary picture that keeps people in ignorance and maintains the royal protocol. If people knew the truth, the royals would collapse like a pack of cards.  Rather like our false democracy and false economy it survives by maintaining mass ignorance.  We are led to believe the royals are chosen people, there because an invisible man says so.

In reality the royals are there because they go out of their way to breed psychopaths whose ruthlessness throughout the ages has murdered and stole their way to the top. It has served them well. They look upon those of us that are not psychopaths like dirt beneath them. It is blatantly obvious but people fail to see it.  I believe in politeness and respect but why we should bow and curtsy to the Queen is beyond me.  To me she is a person who’s a product of cousins marrying and a bloodthirsty ancestry that she should be ashamed of, not proud of!

The royals also have all the psychopath traits such as being seen to support major charities so as to give them a “caring” image. Psychopaths thrive on self-gratification, regardless of the consequences, and the constant need to boost their own ego. Above all they thrive on nervous tension and/or suffering of others, it gives them a high. This is how they can accumulate vast wealth whilst seeing suffering in the world and not spending a penny to help. They get other people to spend their money, via their phoney charity support, but they never put their hands in their own rich pockets!

Having several secret sex partners whilst married is common in Royal circles. Psychopaths are also closely linked to homosexuals. Little wonder the royal household is full of them. The Queen Mother surrounded herself with homosexual servants. Prime minister Ted Heath was said to be homosexual. There is evidence that Churchill was bi-sexual. Allegedly Tony Blair is bi-sexual.  Apparently in the 1970’s and early 1980’s Blair was caught in a public toilet with another man carrying out an indecent act.  When charged at Bow Street Police station in London, he gave his middle name, Lynton.  Many Prime Ministers and Government ministers, throughout the years, have been involved in a range of sex and/or fraud scandals, many of which have been suppressed. Such people are selected for high office as the banks that control them can easily blackmail them.

The mystique and the Royal stage-managed protocol that surrounds them is designed to demean the public whilst metaphorically placing the royal on a pedestal.  We are led to believe they are a family to aspire to, but in reality they are anything but!  To me they are a freak show!

I always laugh when people go to the palace to receive their gongs. They are dressed in their penguin suits and interviewed outside. They always say the same, how marvellous the Queen is.  They are hardly going to say she is a miserable old bag that’s got bad breath, is on an ego trip and stinks of stale piss are they!
Posted by Tax Slave at 11:42