A Funny Thing Happened on The Way to Humanity!

No, the photo in the title isn't depicting the "Randy Eyeful Nudist Colony" although it could be! Joking aside, John Hamer joins Eric von Essex for another ground-breaking show. This week John talks about Darwin’s Evolution that's as scientifically provable as William Gates medical qualifications!
Posted by Tax Slave at 12:05 No comments:

Roll up, roll up for the greatest show on earth!

What did the moon landing hoax teach us and what are its world wide implications? Firstly it showed us the public are easily fooled and secondly many scientists fall into "The King's New Clothes Syndrome." This is where scientists go along with a political agenda fearing ridicule if they step out of line! They also fear losing funding, money is always used as an incentive to toe the line!

Looking back through history, the "Wolf Pack Syndrome" mentality whereby the masses rigidly follow the directive of a minority in high office has often brought civilization to its knees. The mass genocides of Stalin's former Soviet Union and Mao's China would have been impossible to implement without "Wolf Pack Syndrome" and "King's New Clothes Syndrome" amongst academics/scientists.

In my view, we are seeing "Wolf Pack Syndrome" and "Kings New Clothes Syndrome" being used extensively to terrify everyone into compliance with the current seasonal f1u being hyped beyond all proportions to bring about a totalitarian political agenda. As with the supposed moon landings and the current seasonal f1u hypochondria, you can present the masses with overwhelming evidence that they have and are being lied to but they will dismiss the facts in favour of the myths! As Mark Twain once said: “It's Easier to Fool People Than It Is to Convince Them That They Have Been Fooled.
Posted by Tax Slave at 12:59 No comments:

Houston we've got a problem!

The amazing story of how three contortionists (they had to be in order to get into bulky space suits in a confined space) went to the moon! How they defied the laws of physics, throwing up moon dust on a moon buggy without causing a massive dust cloud!

How did the batteries tolerate freezing temperatures? How did they manage to get studio lighting to the moon in order to produce near perfect backlit photos?

Live coverage from the moon in the days when it took a fleet of vehicles to get a live television broadcast from Barnsley to London! Jaw dropping stuff eh!

Now, how on earth did they lose all the scientific data on how they did it! Sniff sniff, can you smell something? Is it cats? Dogs? No it's bovine excrement! John Hamer, Shannon (in America) and Eric von Essex question if NASA should really stand for National Association of Space Actors lol!
Posted by Tax Slave at 22:31 No comments:

Misdirection of Jack the Ripper Evidence. With John Hamer and Eric von Essex.

Uglyness is the new normal! 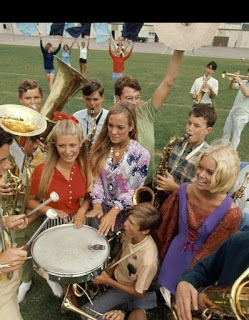 I miss those days, about fifty plus years ago, when people were normal. The above photo was taken in 1969. Notice how slim and healthy everyone looked.

Sadly ugliness is now the new beauty thanks to decades of ideological subversion causing, in my view, a form of mind fog. Also people nowadays have had all forms of self respect drained out of them, hence so many are obsessed with telling everyone about their sex lives.

Minority and so called oppressed groups are hyped up and people are made to feel guilty for something they haven't done! Also the destruction of pride and culture; replaced with fake pride and fake culture along with imposed communities (mass rabbit hutch housing) run by change agents. Again, it's all part of Ideological Subversion to psychologically destroy the individual and make them a slave of the state.

The West LOST the Cold War without a shot being fired. Over the years the slow creep of communism has slowly infected society whilst people are distracted by deliberate news/information misdirection. The communism we have today is nothing whatsoever to do with the former Soviet Union or modern day Russia. It stems from the former Frankfurt School that was booted out of Germany in the 1930's and welcomed into America with open arms. From thereon the Frankfurt School spread its evil tentacles into our education systems throughout the west and beyond. The psychopaths we have in power today is the result of a corrupted education system.