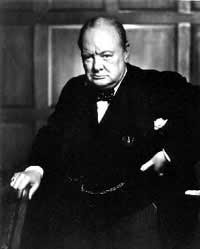 Interpretation of history isn’t necessarily what happened but usually what a minority in control want you to believe.


The authorities keep regurgitating the same lies about Churchill to each generation. In reality Churchill was, I believe, nothing more than an egotistical psychopath responsible for the deaths of countless millions. He was far from this country's savior.

On September 1st 1939 when Chamberlain was in power and Germany invaded Poland, this country was under no threat from Germany whatsoever. Few people realize the former Soviet Union was due to invade Poland on exactly the same day; it was part of a pact. They held back and invaded Poland two weeks later. There are photographs of German and Soviet troops meeting up in Poland and rejoicing their victory together. As Britain declared war on Germany on September 3rd 1939 for invading Poland, why didn’t Britain declare war on the Soviet Union for doing the same two weeks later?

Churchill was put there by the banks to save their empire. They paid off his gambling and drinking debts provided he did what they told him. The rest is history.
Posted by Tax Slave at 10:47