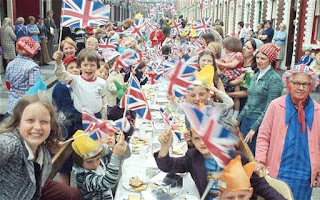 What exactly is the Royal Jubilee really celebrating? The obvious answer is sixty years of Mad Lizzy on the throne, but is it? I say “Mad Lizzy” as I personally believe she is not exactly what we are led to believe. To me, the sycophants that are employed to perpetuate the royal extravaganza show are nothing more than master illusionists that are stage managing a freak show. We are continuously told how marvellous the Queen is, but is she? I question the mentality of someone that appears to be devoid of personality and compassion and believes they are superior to everyone else. People have been locked up in asylums for less!

The media often lower their voice when speaking about the royals as if they are humbled by their greatness. I question this. Royals that marry their cousins and perpetuate a myth of their superiority are seriously deluded. Their inbreeding in order to maintain a healthy stock of psychopaths is hidden behind the illusion that they are above everyone else. To believe they represent us is complete rubbish. Words such as “Your Highness” and bowing and curtsying to the Queen help to maintain the myth. In reality they are a dysfunctional bunch of people of questionable intelligence and suspect heritage due to their occasional affairs with servants. What exactly does the Queen do? To me, her role is to prance around the world looking as if she has a horrible smell under her nose, whilst Phil the Greek looks like the smell that’s under it! It’s all part of the illusion that deflects public attention away from what I believe, is nothing more than criminality. Vast areas of land and property are owned by the Royals, of which little, if any, was acquired honestly. It was stolen, admittedly by their ancestors. There are also very dark and sinister allegations, from many whistleblowers, of other activities the royals allegedly get up to, that stimulate their psychopath mentality!

The royal extravaganza freak show deflects public attention away from allegations that if known would result in the royals being arrested. They would be put on trial for treason, fraud and an array of other charges to do with their alleged murky underworld. Every aspect of the Queen’s public life is stage managed to perfection. It’s like chocolate covered sewage made to look like a cake. It may look appetising but dig slightly underneath and you find something unpalatable and very unpleasant. Truth doesn’t need to be continuously embellished or proven, truth stands up for its self. Our grovelling media fails to dig slightly below the surface. Apart from the occasional shock horror headline of a young royal stepping out of line, they go along with what the freak show master illusionists tell them. They say the Queen continues to do a marvellous job and has never put a foot wrong. In reality the queen can’t put a foot wrong as she is nothing more than a puppet. The Queen’s psychopath bloodline is something to be ashamed of. Her ancestry is awash with bloodthirsty horrific cruelty.

Throughout the years the royals have cared little for the people they are supposed to represent. Their only care is for their own incredible wealth. In much the same way as rich people form foundations in order to avoid tax, I believe most, not all, charities are a front for unpleasant people to show they have a compassionate side, which in reality they haven’t! Again, it’s all part of the media extravaganza.

As the Queen signed away our rights to the EU, she is no longer the Queen but a citizen of Europe. By allowing the Maastricht Treaty (formally, the Treaty on European Union or TEU) on 7 February 1992 she allegedly committed treason and went against her Coronation Oath. As she is therefore no longer the Queen why the heck are people celebrating sixty years since her coronation? Her reign was just forty years 1952 – 1992. No doubt this phoney sixty year anniversary is yet another stage managed illusion to channel public attention away from the fact that state criminality, of which I believe the royals are an integral part, continues to rob us. I haven’t heard the Queen having to cancel her gallivanting around the world because she can’t afford it, or her having to travel via public transport to save the planet. To me the Jubilee Celebration is the establishments’ way of having a laugh at our expense. It is showing how the masses will believe almost anything and follow like sheep. It’s time we started asking questions, finding the truth behind the hype. If the entire gang of criminals that currently rule us were brought to justice, relieving us of the burden of usury and ridiculous taxes, that really would be a celebration. Until then I will politely tell the establishment where they can stick their flags!
Posted by Tax Slave at 13:34