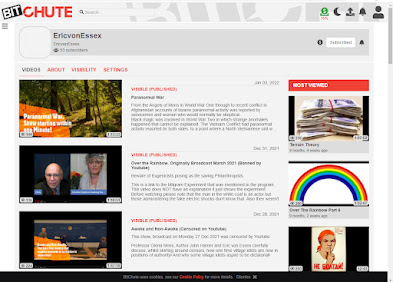 Monday's show will no longer be broadcast live on Youtube, due to, in my view their support for censorship tyranny. In future the live show at 8:00pm (UK Time) will be broadcast on Facebook and eventually Twitch. It will then be downloaded onto my Bitchute Channel. Please call back for updates of where the live show will appear.

Since Mondays show was removed by Youtube for "Medical Misinformation" and I was subsequently banned from publishing anything for seven days, I have decided to only use Youtube as a form of signpost to direct people to other platforms where the show will go out live. Apparently if I get another ban before March 31st, they will remove my entire Youtube site!

To me, Youtubes's behaviour in censoring an opinion and only allowing one big brother dictated view is an insult to our ancestors who fought and died for what they believed to be freedom of speech.  To me it's on a par to metaphorically pissing on their graves!  Truth is pure it doesn't require censorship only lies do. Censorship is the last bastion of tyrants and I don't support anyone who supports tyranny.